This article complements the Official release newsletter and focuses on graphically representing features that were briefly mentioned in the newsletter under the "What else is new?" section.

The most notable features in 2022.4 release are fully presented in the Offical release newsletter and are listed in the following list.

Remove all the enabled devices from the device list at once

The method used for the custom IFFT-based filter is referred to as the ‘Overlap-add method’. The overlap-add method is equivalent to using a custom FIR filter, but it is more efficient in case of a large number of filter taps. A large number of taps is required to achieve the desired frequency response of the filter. Generally, more taps (or FFT lines in the case of this IFFT-based filter) will approximate the frequency response more closely.

Since the overlap-add method is equivalent to an FIR filter, this custom filter has now also a phase change option. The phase can now be set manually between the input and the output signal.

A new option Preview axis type was added where the axis scales can be previewed as linear (Lin-Lin) or logarithmical (Log-Log). 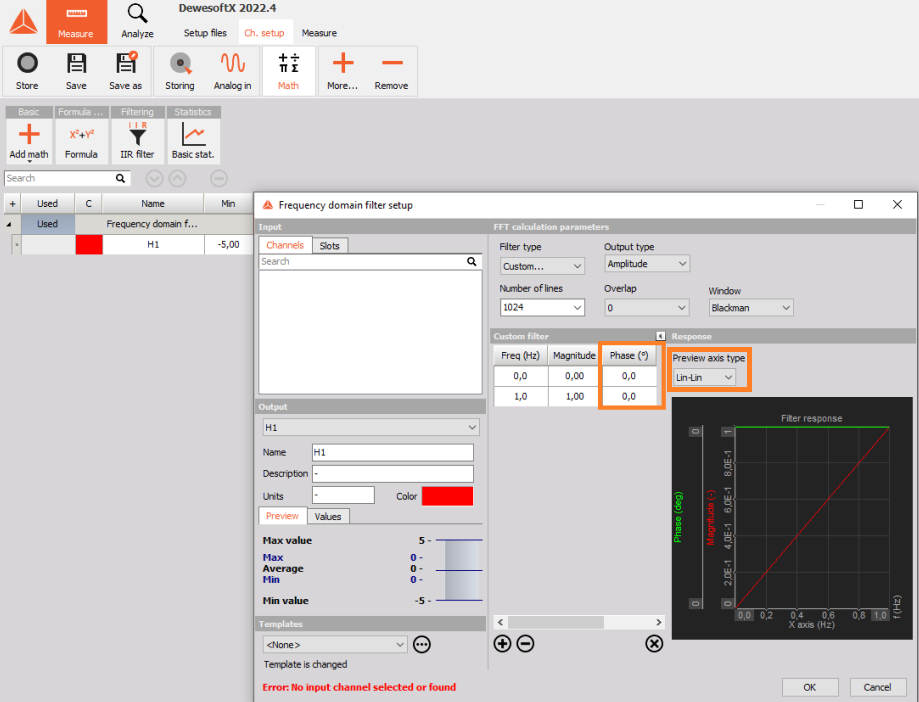 Setup statuses linked to AI channels are now merged into the already existing live setup status overview at the top of the DewesoftX screen, where other setup statuses are accessible.

XCP output RT module now automatically generates output, according to analog inputs. In RT, run mode, you have no option to manipulate channels because all of them are locked.

CAN channel names now have an additional prefix

The CAN channels with the same name now have a long channel name for easier navigation. We can freely determine the port and can name it.

With this new feature, you can now define triggers, with scope math, when you would like to start the measurement and you do not need to capture the whole data for CPB.

We introduce a new processing marker - MIN marker,  that is available on both the 2D and 3D graph and returns you the minimum value of the selected signal.

Export a single loop of animation from the Modal Geometry widget

On the left side under the Advanced option, now we added an animation export feature, where you can easily download avi. format.

The user-defined TAGs are now stored directly in the project file. With this capability, you can now always reuse them in any newly opened setup file.