In Dewesoft we offer the possibility to import custom IIR filters created in other environments such as Matlab.

In both cases a 6th order lowpass Butterworth IIR filter is created, with the cut-off frequency at 1000 Hz at 5000 Hz sample rate.

Example #1: Creating filter with Filter Design & Analysis Tool ("fdatool")
Enter the settings for the chosen filter in the "fdatool", where 'Fs' presents sample rate and 'Fc' the cut-off frequency:

To process the SOS matrix and gain vector, the data need to be exported in to the workspace.

We get the following results:

Each row of the SOS matrix represents different section. The first three (1:3) values in the row represent the “a(input)” coefficients. The 4:6 values represent the “b(Recur.)" coefficients, which have to be scaled/recalculated. The values have to be divided with the correct gain factor. For the calculation you can use the following equation:

After the recalculation we get the following coefficients:

Example #2: Creating filter in Matlab
To create zeros(z), poles(p) and coefficient(k) of the filter the following function is used:

From the z, p and k values the SOS matrix and gain are calculated with the following function:

In this case the gain is a scalar and not a vector as in the previous example, but we can simply create a vector as:

and do the same procedure for the scaling/recalculating of the coefficients as before with the following function:

The coefficients are slightly different as in the first example, but are in the same ratio which is important.

We add the channels to the Modal test using Shaker as the Test method:

We can see that all three filters gave us the same response, from which we can be sure that the filters are the same: 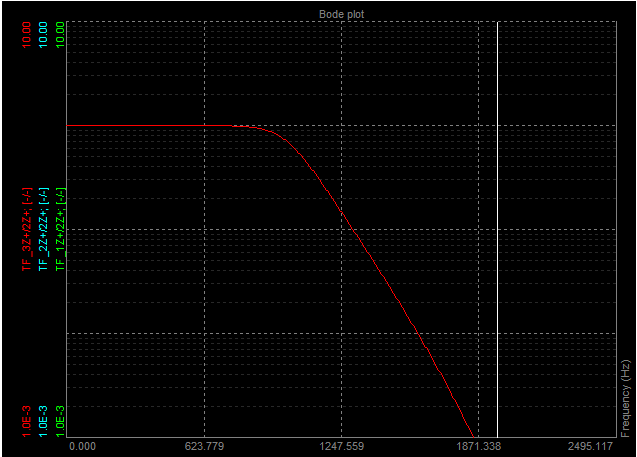